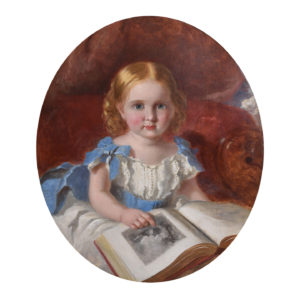 James Sant was an important 19thcentury portrait painter and was a pupil of the artists John Varley and A W Callcott.  He also painted allegorical female figures and genre subjects.

James Sant was a prolific exhibitor at the Royal Academy between 1840 and 1903.  Sant , he was elected an associate of the RA in 1861 and a member in 1869, retiring from the Royal Academy two years before his death in 1914.  James also exhibited at the Paris exhibitions, wining a bronze medal in 1889, at the Universal Exhibition.  He was appointed portrait painter to Queen Victoria in 1872 and as a portrait painter to the Queen, he enjoyed the patronage of many noble and landed families. Portraits by him can still be seen today in many English country homes.

James Sant’s portraits differed from those of his peer’s, in that he portrayed his subjects in natural surroundings, making the finished work appear like a genre study, with the character of the sitter shining through.  This technique is clearly evident in The Picture Book– the star of the show is the pretty young girl, dressed in a broidery anglaise dress with a blue sash and ribbons. She has paused from looking at her book, keeping the page with her finger, as she looks in the direction of the artist. Her sweet, cherubic face is gently illuminated by light from behind and the choice of a russet backdrop is a perfect contrast to the little girl’s crisp white dress. James Sant has portrayed the sweet innocence of the small child.