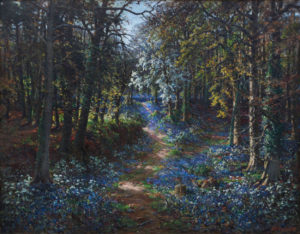 Arthur Meade was born in Somerset in 1864 and was a traditional painter of landscapes, although he also painted some portraits and figurative work. He became particularly well known for painting bluebell woods in his native Lelant and around the West Country, earning himself the nickname ’Bluebell Meade’.

Exhibited in the Royal Academy in 1937, Bluebell Time is an outstanding example of Meade’s oeuvre. Arthur Meade, like his fellow Newlyn artists, enjoyed painting ‘plein air’, creating magnificent bluebell-bedecked woodland scenes, so often found in Devon and Cornwall. Arthur Meade uses a fluid brush stroke, with thick impasto, giving texture and depth to his work. The path in Bluebell Time is lit with the dappled sunshine, shining through the gaps in the thick foliage of the trees, leading the viewer into the far distance of the wood. Arthur Meade uses a strong palette of bold colours, rich copper tones, vibrant blues, a dash of red, subtle splashes of white on the ground and on the archway of the hawthorn tree spanning the winding woodland path – an idyllic scene of gentle peace and quiet solitude, synonymous with our great British countryside.

Arthur Meade enjoyed considerable success during his lifetime, with his painting The Merry Springtime being described on Show Day in 1905, as ‘a dream of colour’, winning him an award at the Carnegie International Exhibition in Pittsburg in 1907. Another fine work – A Dorset Farmyard was purchased by the Mackelvie Trust Collection, Auckland Art Gallery from the Royal Academy in 1899, with a reviewer commenting that it won the admiration of all by its clever truthfulness and brightness. Arthur Meade had twenty-two works accepted by the Royal Academy between 1894 and 1937, and in some years he had a many as five works hung – a marvellous achievement for any artist.