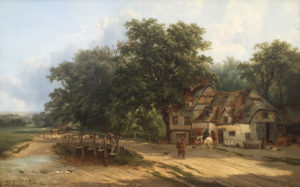 Arthur Gilbert was born Arthur Gilbert Frederick Williams in December 1819 at Newington Butts Road in Stoke Newington, London. He was the fourth son of the painter Edward Williams and a member of the Williams family of painters, who were related to such famous artists as James Ward RA and George Morland. His father was a well-known landscape artist, who taught the young Arthur how to paint; otherwise he and his equally talented brothers received no formal instruction.

Like many artistic people, Arthur Gilbert was of a shy and retiring nature, he was a devoted family man, but totally involved in his work as an artist. His unique gift for painting was born within him and his fascination for the beautiful scenery of the English countryside, enabled him to put onto canvas, her meadows, gently flowing rivers, verdant trees and farmsteads, in a crisp, colourful manner, contrasting lush greens with red-roofed barns and thatched cottages. Arthur Gilbert was equally adept at painting the farm workers, grazing sheep, horses at work and cattle idly drinking water in high Summer or in the glow of Autumn. He painted ‘plein air’ and transferred his love and affinity with the countryside into his paintings.

In this highly accomplished work The Bell Inn, Arthur Gilbert paints a rustic village inn, nestling under a canopy of trees, a wooden bridge crossing the shallow river, with sunlight illuminating the path – a man on horseback has paused for a drink at the inn, a man fishes from the bridge, and a flock of sheep head for the fields, following a horse and cart. Arthur Gilbert has created a scene of gentle serenity, peace and of a time long gone by.

Arthur Gilbert enjoyed considerable success during his lifetime, changing his name from Williams to avoid confusion with other members of the Williams family. He exhibited 48 works at the Royal Academy 1836-1894, 51 works at the British Institute and 11 works at Suffolk Street. He was one of the three most successful of the Williams brothers and his work was recognise as such, including a personal invitation from W.M. Rossetti to send paintings to the first Exhibition of Living British Artists, held in New York in the autumn of 1857.

Arthur Gilbert lived most of life in Barnes, London before moving to Surrey, where he died in 1895. His two children Kate and Horace were both artists for at least part of their careers