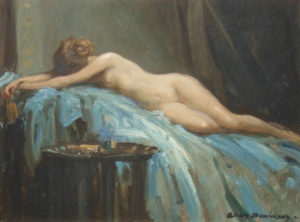 Son of the artist and etcher Thomas Davidson, who in 1882 had a purpose built studio in Hampstead, the young Allan was encouraged to paint from an early age. He studied at the Royal Academy Schools in London, where he was Silver and Bronze medalist winner of the Armitage Prize.

He continued his studies at the Academie Julian in Paris, where he was influenced by the style of the emerging impressionist painters. These artists broke from the tradition of European painting, using a rapid, broken brushstroke, an awareness of light and shade, painting in bold colours, capturing the subjects without detail, and painting the image, as one would see it, if they just caught a glimpse of it.

The Artist’s Model is a delightful study of the artist’s muse, laying on a blue draped chaise long, beside a table with the artist’s palette and paints.  Her head is demurely resting on her slender arms, her titian hair is dressed in a loose chignon, and her naked body gently lies on the couch, as if asleep and oblivious to the viewer. Allan Davidson has dispensed with the traditional academic approach to figure painting and using a subtle range of muted colours, he has produced a scene of gentle quietude. He has used a dancing economy of brushwork to describe light – the subdued light streaming in from an unkown light source, highlights the model’s creamy skin tones.

Allan Davidson enjoyed considerable success during his lifetime, exhibiting at the Royal Academy, the Manchester City Art Gallery, the Walker Art Gallery, Liverpool, the Leicester Gallery, the Grosvenor Gallery and the Royal Miniature Society. He was  elected a member of the Royal Society of  British Artists in 1901, the Royal Institute of Oil Painters in 1920 and associate member of the Royal Miniature Society in 1920. He taught at the Central School of Arts and Crafts in London, before moving to Walberswick in 1925, where he became a member of the prosperous intelligentsia who moved from London to the artistic community there. His favoured genre was figures and portraits but Davidson is especially known for his studies of nudes, often depicting himself at work in his studio, painting his favourite models.

Allan Davidson received the honour of being commissioned by King George V’s wife, Queen Mary, to paint a miniature for her famous Dolls’ House, which is still on view at Windsor Castle. The house was designed and built in 1924 by Sir Edward Lutyens and is packed with items representative of the era. He is in good company, as among those also commissioned were Sir Arthur Conan Doyle, J M Barry, Thomas Hardy, Rudyard Kipling, Somerset Maughan and Sir Alfred Munnings.