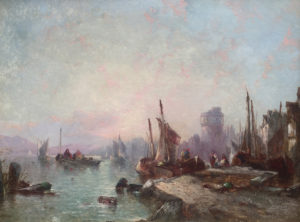 Alfred Montague was a painter of landscapes, town views, coastal and estuary scenes and he painted the occasional pure seascape. 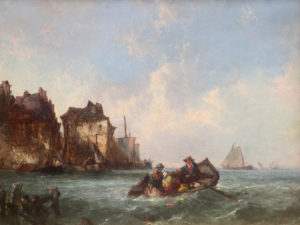 Although many of his works were painted around the coast of England, Alfred Montague also travelled throughout Holland, Belgium and France, painting many scenes along the Seine and the Meuse. Alfred Montague’s style is quite distinctive, and he painted using a fluid brushstroke and subtle palette, not afraid to use impasto, to reflect the light and to give his paintings texture and depth, especially on the crest of the waves and the clouds in the sky. His skies are particularly fine and as in the two works Off the Dutch Coast, he often choose to depict the scenes at different times of day, to produce a beautifully contrasting, but balanced pair of paintings.

Alfred Montague was appreciated in his day and often sold his paintings for in excess of £100, which was a considerable amount of money at the time. He exhibited extensively in London and the provinces, at Suffolk Street, the British Institution, the Royal Institute of Oil Painters, the Royal Society of Artists, Birmingham, the Glasgow Institute of Fine Arts and the Dudley Gallery. Alfred Montague was elected a member of the Royal Society of British Artists in 1843.

Alfred Montague’s work is represented in the Salford Art Gallery and the City of York Art Gallery.