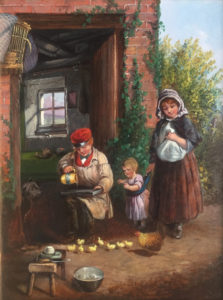 Alfred Henry Green was a Birmingham painter of country scenes, rustic genre and animals, who exhibited at the British Institution in 1862, four works at Suffolk Street 1844-1861 and the Royal Academy in1861.

Mindful of the demand from the newly rich merchants of the day, who forced to spend their working life in urban surroundings, craved idyllic views of the countryside, Alfred Henry Green painted charming scenes of rural life, with fresh faced children happily at play or helping with the daily chores of feeding the animals, gathering kindling wood, fetching water from the streams and wells – scenes reminiscent of a time gone by. Nostalgia played a huge part in the demand for these popular domestic subjects in the mid nineteenth century and Alfred Henry Green had a ready market for his work.

Feeding Time is typical of this popular domestic genre. A young boy, with a jaunty red peaked cap, carefully pours water onto a tray for the thirsty little chickens, watched by a young girl, restraining the eager toddler with a scarf around its middle.  The scene takes place outside a modest red-bricked cottage, with light steaming through the glazed window, illuminating a brace of game birds, ready for plucking on the larder shelf, while the family dog looks on. Alfred Henry Green had a keen eye and paid great attention to detail and the composition of his work, producing some charming paintings.