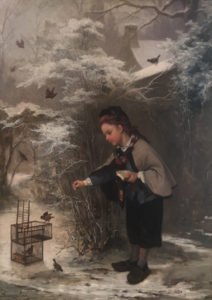 Born in Bordeaux in 1823, Andre Henri Dargelas was a painter of genre. As a young man, he made his way to Paris, and in 1854, he was admitted to Ecole des Beaux Arts. There he studied with the successful academic master, Francois Picot, who instructed his pupils in a neoclassical style of painting. Within three years, Dargelas began exhibiting at the annual Salon exhibition, creating compositions that demonstrated his mastery.

Andre Henri Dargelas later settled in the little art colony of Ecouen, a town eight miles from Paris. It was here that he evolved his new school and produced the quaint interiors and life-like figures, especially of children. He painted his subjects in a variety of situations, ranging from the schoolroom to the family dinner table, and it is these works that have made his name so famous. He chose not so much to lyricise rural life, as to momentalise it and he found a ready market in the new Bourgeoiseie, bringing him both artistic and commercial success.

Feeding the Birdsis a fine example of his work, set in a snowy garden the young boy, warmly clad in a cap and cape is feeding bread to the birds.  The snow covered branches frame the boy, which focuses our attention on the rosy cheeked child and his scarf and cap add a splash of colour to the otherwise muted tones of the painting. The birds hovering above, add movement and life to this charming scene.