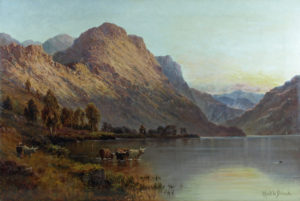 Alfred de Breanski Senior’s love affair with the Scottish landscape meant that this most talented and accomplished painter left behind work of great intensity and passion.  An almost obsessive preoccupation with the Highland terrain (he also travelled and painted in the Lake District and Wales), meant that de Breanski worked through again and again the quality of light as it fell on water, the slatey, scrubby texture of mountainsides, and the interplay of sky and weather.

This painting, is a fine and very typical example of de Breanski’s style – the star of the show here is the landscape, and the painting is about Breanski’s striving to capture the enormity of it, to convey the atmosphere of it.  As if to accentuate this, he depicts.  a herd of Highland cattle, a lone  bird skimming the water and in the distance a small yacht – but these are all rendered tiny and insignificant by the mountains themselves, basking under the rosy glow of a dramatic sunset, so typical of the Scottish Highlands.

Like Turner before him, de Breanski is well known for his dramatic sunsets and skyscapes.  He lived for much of his life in South London and painted many views along the Thames.

De Breanski made his debut at the Royal Academy in 1872, where he exhibited until 1918.  His work was also exhibited at the Royal Institute of Oil Painters, the Royal Cambrian Academy and the New Watercolour Society.

In 1980 he became a Freeman of the City of London.  His many patrons included Sir James Lemon and the Bishop of Peterborough.  Breanski’s work is represented in several museums at home and abroad, including Southampton Art Gallery, the Laing Gallery, Newcastle upon Tyne and the Sydney Museum.