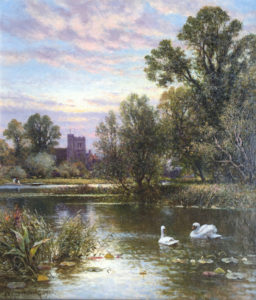 Alfred Augustus Glendening, to give him his full name and to distinguish him from his son and pupil, also Alfred, was a painter of landscapes and riverscenes. Alfred Augustus Glendening was originally employed as a railway clerk, before turning to painting, as a full-time artist, becoming one of the most popular landscape artists of his day. He enjoyed considerable success by painting naturalistic views of Kent, the Sussex Downs and the river Thames for Londoners keen to remind themselves of the neighbouring countryside. In a period of industrialisation and the growth of the wealthy middle class of city dwellers who looked with nostalgia to the English landscape, his work was much in demand. Although the landscape of Kent, Sussex and Surrey, predominate in his oeuvre, the growth of rail travel, enabled him to paint views further a field, of Norfolk, Yorkshire and the more picturesque scenes of Scotland and Wales.

Alfred Augustus Glendening used a soft delicate technique and a fluid brushstroke to recreate scenes of outstanding beauty. The light in his paintings filters through magnificent skies, with fluffy white clouds, often kissed with the rosy glow of dawn or early evening. The winding rivers, with trees reflecting in the shimmering water, meander across the canvas and vanish around a turn in the far distance. Cattle watering, a man collecting reeds in a punt or swans elegantly swimming amongst water-lillies, bring movement and life to his paintings, and seem to emphasise the perceived benefits of living in the countryside.

Alfred Augustus Glendening exhibited many of his works in London at the Royal Academy, 1861-1892, the British Institution and Suffolk Street.