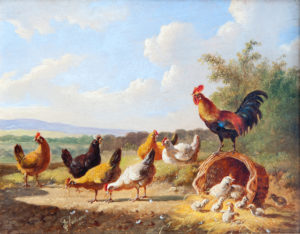 The depiction of farmyard animals has had one of the longest traditions in both Dutch and Flemish art, however, it was not until the 19thcentury that it achieved widespread popularity.  With the Industrial Revolution under way and an ever-

increasing population in the cities, wealthy patrons longed for images of the life in the unspoilt countryside and there were many artists happy to fill the need and in Holland, Albertus Verhoesen was one of them.

Born in Utrecht in 1806, Verhoesen received his formal training in the studios of Bruno van Straaten, Jan van Ravenzway, Pieter van Os and Barend Koekkoek.  Each of these artists had an influence on his style, but his choice of subject matter was greatly inspired by Van Os, whose artistic family was among the most influential during the 19th century.  Like his master, Verhoesen 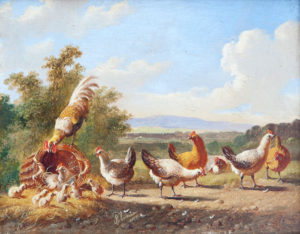 chose to paint rural landscapes often focusing in on a small group of animals. This beautifully executed pair of panels, with the grouping of hens, cockrels and chickens, set against a landscape illustrate the fine quality and composition of Verhoesen’s work.  He continued to paint these small, intimate paintings until his death in 1881.

Today, examples of Verhoesen’s work can be seen in the museums of Harlem and Utrecht.