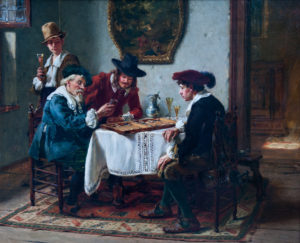 Despite his German origins – he was born in Dresden in 1854 and was a member of the Munich School of Painting – Albert Friedrich Schroder was keenly influenced by the art of the Lowlands. He was a pupil of Charles Verlat, the Belgian painter and also studied under Pauwels.

Albert Friedrich Schroder was fond of historical and costume painting – although he did also paint figures and portraits and worked as an illustrator – the work A Game of Backgammon is very indicative of his historical or cavalier painting. Typically, Albert Friedrich Schroder favoured interior scenes: affluent parlours where well-to-do gentlemen passed the time through merry-making. In this painting there are all the signs of affluence: solid furniture, beautiful carpets – even an oil painting on the wall – and as these gentlemen enjoy fine wine, they indulge in a spot of gambling.

Backgammon often appeared in seventeenth century Dutch and German paintings including those by Bosch and Bruegel, and Schroder is showing his accurate research by depicting the game. Historical accuracy was obviously crucial, although many nineteenth century painters certainly took artistic license when it came to their themes – these were certainly made palatable to nineteenth century bourgeois sensibilities.

Other examples of  Schroder’s work can be seen in the Museums of Duisbourg and Magdebourg.