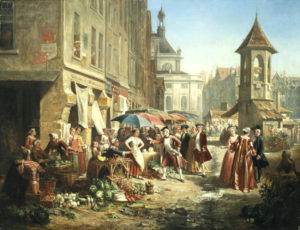 There is little doubt that the later nineteenth century looked back a hundred years with enthralment, and artists catered for this fascination with pictures set in the eighteenth century, depicting the taste, elegance and luxury of the previous century. This admiration and nostaglia to a society in which the aristcrat held sway, entranced the Bourgeoise patrons and artists were eager to satisfy their obsession with the golden age of the eighteenth century.

In France, one such artist was Adolophe Monfallet, and in his painting A Parisian Market, he has combined brilliant technique and painstaking research to produce a wonderful scene set in an eighteenth century market place. The focal point of the painting is an altercation between a bewigged and powdered gentleman and a feisty market stall holder. The argument has attracted the attention of all the market – the stall holders, the groups of finely dressed ladies and gentlemen, and the people in the upstairs windows, peering out to see what all the fuss is about. Monfallet has illuminated this part of the work to draw the viewer into his painting, he has used great attention to detail in the costumes, the market traders’ produce and the buildings. There is so much going on in the scene, with even a touch of humour – an unfortunate man trapped in the stocks in the town centre tower, is awaiting the pelting of rotten fruit and vegetables, safe for a moment due to the ensuing diversion.

Monfallet was born in Bordeaux in 1816 and later enjoyed success in Paris, exhibiting at the Salon between 1850 and 1882. His works can be found in the museums of Bordeaux and Reims.